Ticket: Free
Click HERE to register.
Please email yalecenterbeijing@yale.edu if you have any questions, or call Yale Center Beijing at (10) 5909 0200. 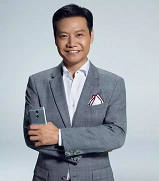 Mr Lei's "Philosophy of the Internet" can be summed up as follows - Focus, Strive for Perfection, Loyalty, Speed. With this overarching philosophy, Mr Lei has reshaped the Internet of Things (IoT) landscape through Xiaomi's smartphones, TV box, television, and routers, etc. With his investments in dozens of startups to populate the Xiaomi ecosystem, he is a staunch advocate for transformation and upgrading of Chinese manufacturing industry.

In 2015, Mr Lei was the only Chinese entrepreneur selected by TIME magazine as one of the 100 most influential people of the Year and was described as “China’s Phone King”. In the same year, Mr Lei was named one of The World's 50 Greatest Leaders by Fortune magazine. He also won the Asia Society’s 2015 Asia Game Changer Award. In 2013, Mr Lei was named CCTV China Economic Person of the Year.